Kris Kool has known the sumptuous vertigo of diving among dying asteroids...

... got into a fight in almost all the inns in the universe...

... and he loved beautiful and dangerous women!

This time he accepted a job that perhaps he shouldn't have...

... and now he is shipwrecked on an planet unknown to him...

Find it out by reading KRIS KOOL: the first pop-psychedelic graphic novel by the French SF comics master Caza, in a completely restored and recolored version, in English, 50 years after its first and only edition.

FOR INFOS about combined shipping and retailing WRITE TO info.passengerpress@gmail.com

Preorder and buy it here!

Paris, 1968. During a time full of artistic turmoil like never before, after being an independent advertising graphic designer for ten years, Philippe Cazamayou, then almost 30, decided that it was the right time to focus on a career as a cartoonist.

Thanks to the foresight of such a visionary publisher, two years later, Cazamayou managed to publish his first graphic novel, "KRIS KOOL", written and drawn taking inspiration from the wild independence of the science fiction characters imagined by Forest and the psychedelic colors found in Peellaert's works.

Thus the artist known by everyone by the nom de plume of CAZA was born. In the years to come, he would become one of the cornerstones of Metal Hurlant and then of Humanoïdes Associés together with Moebius and Druillet.

Not only has KRIS KOOL, CAZA's powerful psychedelic-pop opera, never been reprinted since 1970, but it has never even been translated and published in other languages either. 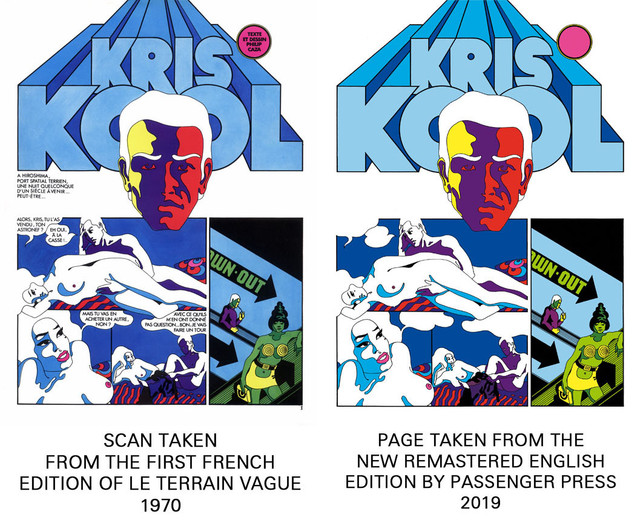 It is therefore with enormous pride that Passenger Press finally presents the pre-sale of the long-awaited - and completely remastered - English edition of "KRIS KOOL", sporting new and sparkling colours and an equally new modern graphic design, respectful of the original choices of the author.

Our edition, accompanied by an EXTRA section with never before seen materials (test pages, color proofs as well as the b/w pages) will have an EXCLUSIVE BONUS ONLY AVAILABLE FOR THIS PRE-SALE, which will never be available afterwards:

The book will come with AN UNPUBLISHED A4 COLOR PRINT, MADE AS AN EX-LIBRIS AND SIGNED AND NUMBERED by the Master Caza, ONLY FOR THE FIRST 200 COPIES!

Preorder and buy it here!

FOR INFOS about combined shipping and retailing WRITE TO info.passengerpress@gmail.com

Passenger Press is a non-profit self-publishing project. Our main objectives, financially, are to at least meet the costs for the production of our beautiful comic books, that we make with special care for all production aspects, with a particular focus on the paper product design (which has always been our strong suit).

We have never kept the numbers of the print runs of our limited editions secret, nor did we ever speculate on the cover price, because we have no intention of relying on distributors who take up to 60% of the cover price: we have been among the first publishers to always disclose sales data, since our first Lucca Comics festival in 2007.

For this reason,  following the example of many international crowdfunding projects, we also want to disclose the technical and economic aspects of this operation.

THE PRICE OF THIS ENGLISH EDITION BOOK IS 25 EURO.

PAPER TECHNICAL DETAILS of this edition:

- 96 color pages 21x28 cm format, in paperback, printed on uncoated paper and soft touch cover (but I will do also a print proof with the cover printed on another type of paper);

NATIONAL SHIPMENTS (FOR ITALY ONLY) ARE 5,5 euros for mail with tracking ("piego di libri").

INTERNATIONAL SHIPPING (EUROPE AND REST OF THE WORLD) ARE 25 euros for international registered letter with tracking.

Minimum order 100 copies in the first month, to meet the production costs of the paperback book (including printing of the album and the ex libris, translation, packaging for shipments, printing proofs). In the case that the minimum order is not reached, all purchases will be cancelled and the money refunded.